Optimal extension of your own and organisation-internal perspective (internal view) to a 360° view.

All we need for an order is a short briefing for the purpose of developing a precise question. We deliver your solution with the final presentation of our analysis.

To answer one or more questions, we do not need a detailed project description. It is sufficient to describe the initial situation and your desired objective in a few keyword-like sentences.

We check your briefing for feasibility and if necessary ask for more information. If everything matches - we get started.

The solution based on the question is realized by certified IDEENEvelopers with our brain research based ideation software - the NEURONprocessor.

The NEURONprocessor enables the reduction of everyday thinking in connection with an extremely increased intuition - and thus allows to act apart from predetermined thinking patterns.

We carry out your project according to your briefing 100% anonymously using the NEURONprocessor with our team of "Certified Idea Developers". Finally, the data is evaluated by our analysts. All project participants are bound to secrecy by non-disclosure agreements.

The holistic solutions of our ideation are always comprehensible - and directly applicable, through the integration into your already used tools.

The result is made available via Word (text), OneNote, MindMap or on a digital whiteboard. Our delivered information will be evaluated by you and integrated into your underlying project, plan or problem.

We are available for any inquiries - also via collaboration tools such as Microsoft Teams.

Our ideation is fast, cost-effective, immediately applicable, delivered in an optimal mental state for idea development, and has a scientific foundation. Successful customer projects prove this:

At a customer with well over 5,000 employees, external and internal communication was often very unspecific and misdirected. In other words, the wrong addressee received the wrong message. This led to frustration and demotivation of everyone involved, as well as half-hearted completion of the respective tasks.

Based on the results, we developed an adaptive steering and control system to direct specified requests to the right addressees in an increasingly transparent manner.

A customer from the financial sector had massive problems in recruiting junior staff. There were various reasons for this, such as the reputation of the industry, working hours, and a few others.

In a very short time, we delivered a coherent concept that helped the client to attract more applicants and more new hires. And, of course, with the client's existing resources.

On application our results:

Our ideation is smart for the following reasons:

In the shortest possible time to high-value concepts and solutions:

Explanation of the main functions of the NEURONprocessor software:

The NEURONprocessor software builds a specific brainwave pattern while in use, which enables the optimal mental state for idea development.

This is because our brain is permanently busy with:

We can consider our right brain hemisphere in this context as a tool that provides us with information that we would otherwise not be able to access - or that we would not become aware of because our everyday respectively waking consciousness is always in front of it.

In everyday thinking and workshops, we are limited in idea generation by our established thought patterns and non-optimal states of consciousness (stress levels). In addition, creativity techniques have methodological weaknesses in their processes - and thus in their results.

In this context, our brainwaves are the key, as our respective state of consciousness significantly influences the depth of our access to information:

His brain waves will be dominated by beta waves, and the left hemisphere will be busier than the right hemisphere.
His “ready to fight attitude” is likely to favor simple decisions that come with two to three facts.
He is not capable of solving complex tasks or producing creative ideas in this state....

This person should show brain waves in the range of alpha and beta waves in his EEG. These are distributed almost in a 50:50 ratio over both hemispheres of the brain.
He appears mentally stable on the outside and is capable of solving smaller complex tasks.

From time to time, a flash of inspiration or an intuitive decision even lead him to his goal more efficiently.

Already better - but it can be even better ...
Optimal

Two things are characteristic for this pattern:

Finally, this enables him to access information that he was previously not aware of or unaware of.

More, succeeds only a select few ...
Pinpoint idea generation
Filling a gap in the market, instead of "reinventing the wheel" umpteen times.
Focused realization
Unambiguous detection of future obstacles, instead of "just-in-time" solution search.
More valid decision making
Accurate personnel decisions instead of expensive wrong decisions.
Novel products
Straight product developments, instead of dead-end developments.
Better concepts
Natural disaster-proof cathedrals, rather than plans for cheap prefabricated houses.
Precise solutions
Precise explanatory bases, instead of low access to the problem reason.
Steering the future
Navigate the future safely, rather than being surprised by the future.
Unleashed creativity
Einstein, Picasso or Goethe, instead of hackneyed prose.
Research & Science
New ways of thinking, instead of entrenched ways of thinking.
Previous
Next

We calculate on the basis of the individual questions that you need answered for your ideation project.

Alternatively, you can use a Standard Ideation »

CURRENT | We help: With ideas for crisis management | More Info »

Minus 25% for research & education. | All prices exclude VAT.

Exemplary solutions of our ideation

Ideas for optimal development, innovation and change for airlines, airport operators and aircraft manufacturers during and beyond the crisis

Ideas for optimal development, innovation and change for digital learning in schools and educational institutions during and beyond the crisis.

Ideas for optimal development, change and innovation for startups, investors and agencies during and beyond the crisis.

Ideas for optimal development, innovation and change for the taxi industry during and beyond the crisis.

A Standard Ideation is a turnkey application, with an already defined questionnaire that has already proven itself for the respective application. We are continuously expanding this offering over time.

Standard Ideation Project
€ 7360 plus VAT
Send a request
Send us your request and we will contact you - or call us directly: +49(0)40 46871237 - or chat directly with us now
Advantages & unique selling propositions 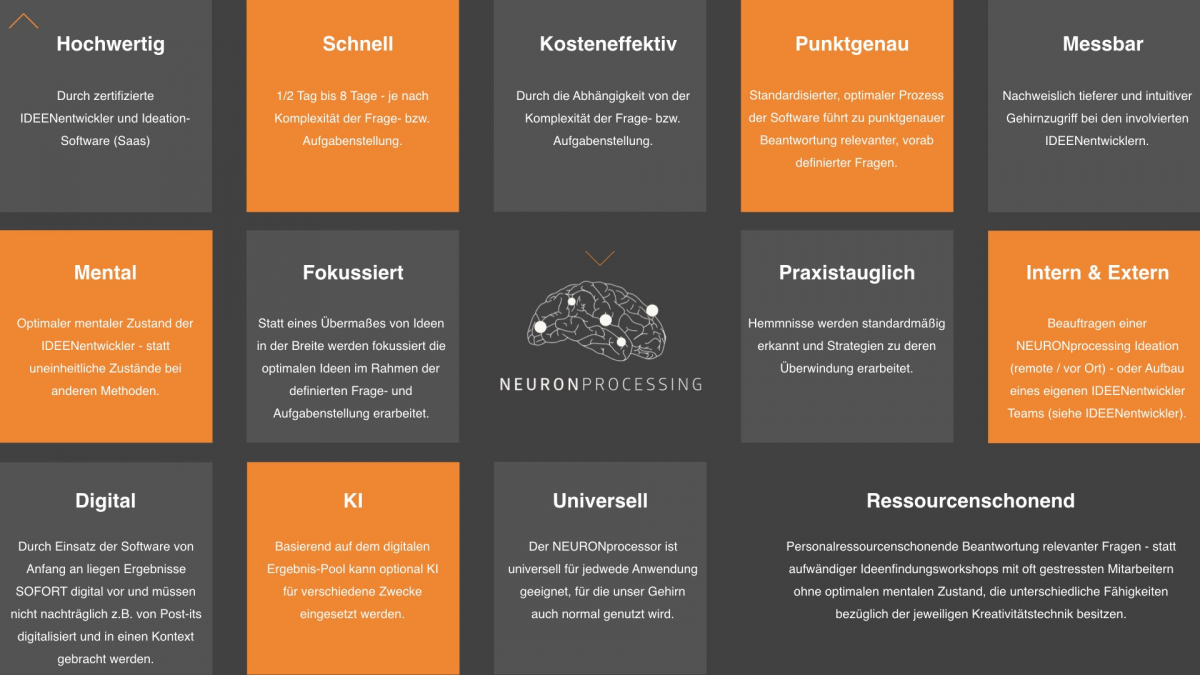 Here is an overview of our other advantages and unique selling points.

1/2 day to 8 days - depending on the complexity of the question or task.

Due to the dependence on the complexity of the question or task.

Optimal mental state among IDEA developers - instead of inconsistent mental states among other methods.

Instead of an excess of ideas across the board, the optimal ideas are developed in a focused manner within the framework of the defined questions and task.

Obstacles are identified by default and strategies are developed to overcome them.

Assigning a NEURONprocessing Ideation (remote / on site) - or building up your own IDEATION team (see IDEA developer).

By using the software right from the start, results are IMMEDIATELY available digitally and do not have to be digitized afterwards, e.g. from Post-its, and put into a context.

Based on the digital pool of results, AI can optionally be used for various purposes.

The NEURONprocessor is universally suitable for any application the brain is normally used for.

Answering relevant questions in a way that saves human resources - instead of time-consuming idea generation workshops with often stressed employees without an optimal mental state, who have different skills regarding the respective creativity technique.

The data gained through our ideation is therefore immediately usable, as it can be implemented directly into the project and collaboration tools you use.

This is due to the fact that we have a 100 percent structured digitization level in the NEURONprocessor software.

Common methods - such as design thinking or brainstorming - average less than 20 %. In addition, there are other clear advantages over other creativity techniques: